(2002 – 2011) Majestic’s legacy will live on through his foals and will be cherished in our hearts forever.

When a special horse finds its way into your life, the time together is always to be cherished.  My first encounter with my special horse “Majestic” was through binoculars at the 2005 AMHA World Show. It was then I approached his owner at the time Don Burdette after a 3rd place placement and was able to acquire Majestic as my herd sire and show horse for Black Mountain. From the first sighting I recognized his special qualities and the following year was a start of a dream come true.  Excitement began to grow  at the 2006 Central Regionals Majestic came home with the prestigious Central Regional Grand Champion Senior Stallion title as the World Show approached, anticipation accelerated.  It seemed like time was flying by, before I knew we were in center ring with our mare winning World Grand Champion Junior Mare with Little Kings Buckeroo Forevermore at the World Show. It finally was time; Majestic came in the senior stallion class full of presence and when the announcer called for the World Champion “Sequoia Majestic Mime” it was at that time the honor of winning World Grand Champion Senior Stallion become a true possibility. I found myself full of excitement as the evening classes approached at the last day of the World Show, when the class started all the World Champion stallions came in for the coveted “World Grand Champion” title. It truly was a MAJESTIC moment. Yes, the announcer’s voiced echoed through the arena once again “Sequoias Majestic Mime”!  Most would feel after such accomplishment the dream has ended, however just within two years “Majestic” has continued on by producing the following World Champions: Alliance Majestic Maiden, Alliance Majestic Minx, Alliance Majestic Olympian,  Alliance Majestic Miss Priss (International Champion),  Black Mountains Majestic Vision (International Champion), Alliance Majestic Valentine (International Champion). 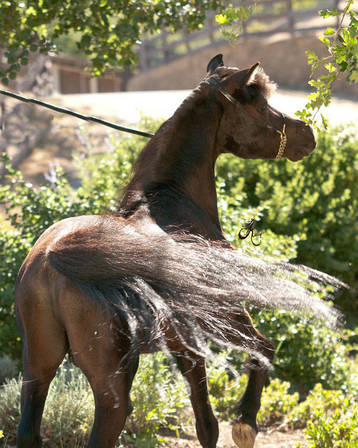